The founding Board members were Bryce Styza, Peter Lettenberger, Donald Fundingsland, Beverly Chappie and LaVern Herman. Their initial tasks were to increase the number of Directors to achieve a broad representation from throughout Waukesha County, and to build the assets of the Foundation.

In 2000, the Foundation reached $1.3 million in cash and commitments, moving closer to providing support for charitable organizations within Waukesha County. Later in 2000, the WCCF awarded its first grants a year earlier than projected. The creation of the Bryce and Anne Styza Fund and the Kathryn Herman Fund resulted in $15,500 in grants for five local nonprofit organizations.

With assets at $1.5 million, the Foundation began taking applications for its unrestricted funds in May and awarded grants in 2001, as planned. The first grant was approved to Carroll College (University).

In 2004, the Foundation’s assets grew to $7 million with more than 40 funds established, including nonprofit agency endowment funds. The Foundation announced the launch of the Artesian Funds, a charitable giving program appealing to novice philanthropists, requiring an initial donation of $1,000. The Foundation named the Artesian Funds after springs that feed lakes and rivers in Waukesha County, likening the springs to the charitable funds that will grow and eventually provide grants to nonprofits.

The WCCF announced the hiring of Dave Schultz as the Foundation’s first full-time director. The Women and Girls Fund of Waukesha County was established with endowment funds from the closed Waukesha YWCA. The WCCF became the 19th certified foundation in Wisconsin by following the standards of performance set by the Donors Forum of Wisconsin and Council on Foundations.

In 2005, the WCCF received a $2 million donation from Wauwatosa Savings Bank, making it one of the largest charitable contributions ever received by a Waukesha County organization and boosting its assets to more than $7 million. Later in the year, the WCCF announced a $5.5 million stock donation by Wauwatosa Savings Bank to more than triple its assets to $13 million.

In 2006, the first Celebration of Giving Award recipients were Bob and Pat Kern of Waukesha, while assets from the Foundation reached $18.5 million. Grants exceed $800,000, and cumulative grants surpassed $2 million.

In 2010, the WCCF earned a ranking of No. 52 on the prestigious Community Foundation Top 100 List. The ranking is based upon the percentage of grants made compared with total assets.

The WCCF announces the retirement of Director Dave Schultz. During his six years Schultz led the Foundation, it grew in assets from $5 million to $22 million despite a severe recession. The number of permanent funds increased from 49 to 160, awarded grants totaled almost $7 million and attracted contributions of about $20 million. Less than a year later, Kathryn Leverenz is named as the nonprofit’s new president.

In 2014, the Waukesha County Community Foundation reaches new heights with a record number of grants totaling more than $2.1 million distributed to nonprofit organizations and programs to provide opportunities and foster growth in Waukesha County.

In 2016, Shelli Marquardt became the third president of the Foundation. During her tenure she led the Foundation through unprecedented growth, navigated a global pandemic, and launched the United for Waukesha Community Fund. Marquardt announced her retirement in 2021.

Melissa Baxter joined the Foundation in December 2021, and after a two-month transition, she became WCCF’s fourth president.

A High Standard for Community Foundations 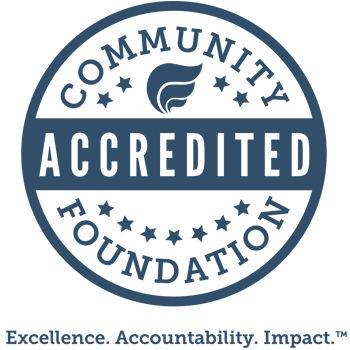